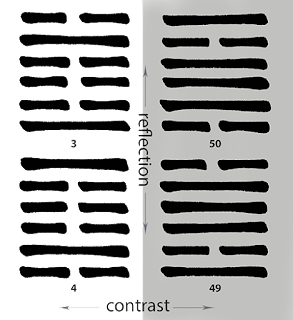 Most pairs in the Yi are reflections of each other. Like a mountain in a lake: upside down.

Another combination is the 'contrast': every yang line in one hex is a yin line in the other and every yin line is a yang line.

When you cast hex.3, the Yi gives advice. But 4 does have some meaning in the advice as well. It is the view from the other side. Not advice about what you should do now, but sometimes it is helpful to see "the other perspective".

The top is now at the bottom, the bottom at the top. Line 3.1 becomes 4.6, and so on. Line 3.5 is about finding a good place. Its reflection, 4.2, is also about a time without solid facts, but now about caring for what is present already.

Between 3.5 and 4.2 is a reflection. For hexagrams and for lines it works the same. In hex.3 there is a beginning without anything already finished.

In hex.4 the start is present, but you don't know yet how to proceed.
Starting or learning - two sides of a similar dilemma. In hex.3 you have to start acting. In 4 you have to learn how to act.
Posted by LiSe at 11:50 AM No comments:

The names (or tags) of hexagrams

The names can be confusing. Chinese is extremely difficult to translate, because every character has a wide landscape of meanings. Many meanings are not easy to clarify as a picture. Like eg wind. Wind is only visible in its workings, so the character for wind is a tree with all its branches blown to one side. A picture-with-meaning is called an ideogram.

There are several ways to clarify hexagram-meanings. I start with the contrasting hexagrams with their pictures (ideograms).

Hex.1 Heaven, creating the patterns of days and seasons with its laws of time and timing. Its animal is the dragon, which brings the rain according to the seasons and makes the seeds sprout.


The character is a picture of the sun at dawn and banners - the brilliant light reflected on dancing banners. Light, leader, center.

Hex.2 is Earth, with its energies of birth, growth and decay. Of survival and eating each other, but also of connection and supporting each other. Its animal is the mare, with her physical and creative powers.
The ideogram of Kun is a clod of earth, or maybe an earth altar, and a picture of either lightning or stretch-out. Both make sense: stretch-out as a description of the vast width of earth, lightning as a description of the energies which inhabit the earth, both the powers which make everything grow, and the spirits of the ancestors.

Hexagrams 1 and 2 are contrasts. Every line in hex.1 is yang, every line in hex.2 is yin.
Hex.1 is about the laws of heaven, with its rotating constellations showing the passing of the day and the seasons, creating time timing, its laws which cause sun, rain and wind to appear, which influence the earth, and thunder through which heaven impregnates the earth.
Hex.2 is female, dark and nurturing, growing all creatures and vegetation from the seeds she receives. Heaven and earth need each other. Neither can create without the other.
Posted by LiSe at 11:10 AM No comments: