Hex.57 Wind - when your number comes up

In many cultures there are images of gods or other forces which make life begin and make it end. Thunder makes seeds germinate, Wind is the 'chooser' which decides about the life-span. 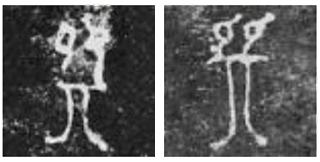 The character Xùn is a picture of a table with two seals on it. Later two hands were added. Wieger: “To elect, to choose. Two 卩 seals of officials, placed upon a 兀 table, to be committed to those who were elected, chosen."

Your seal has to do with what you are made of, and also what you do with your talents and opportunities. Nobody can see the wind, only its effects. Treebranches swaying, dust-devils dancing, waves, bending grass. The wind penetrates, but where it cannot enter, things stagnate and decay. You are supposed to develop yourself, to move and to enter adventures, and never ever come to a standstill. Because 'you' don't matter, what matters is what you do with it, how you move.
In many cultures wind and fate are strongly connected.

Shuogua: Xun suggests the idea of wood; of wind; of the oldest daughter; of a plumb-line; of a carpenter's square; of being white; of being long; of being lofty; of advancing and receding; of want of decision; and of strong scents. It suggests in the human body, the idea of deficiency of hair; of a wide forehead; of a large development of the white of the eye. (Among tendencies), it suggests the close pursuit of gain, even to making three hundred per cent in the market. In the end it may become the trigram of decision.
Posted by LiSe at 7:15 AM 1 comment:

The tag of hexagram 61 is Zhong Fu, inner truth. The character fu appeares 42 times in the Zhou Yi.
Originally it meant captive. It is a picture of a child and a claw: grasping a (small) person.


When the troops returned home, they had to show their conquests. They did it by showing the captives or the number of killed enemies.
Hauling along corpses for a long journey home is not a good idea, so they only brought the ears.
The ears brought home were proof that they told the truth. So the character started to mean truth, sincerity, inspire confidence.
The number of people is still sometimes counted in ears: six ears: three people.

In hexagram 55 line 2 it says: "To proceed brings doubt and anxiety. With confidence Fa gathers." (Fa is the personal name of Wu, king Wen's son).
Wu 'has the power to inspire', he convinces his people and the allies that the eclipse is not a bad sign, on the contrary. It is an omen of the fall of an empire - the Shang of course...
Posted by LiSe at 3:34 PM 3 comments:

Loan characters (or the poetry of a nation)

This character, jùn, is the first character of the bottom line of hexagram 32. Its meanings are "dredge, dig, excavate, develop, extract, deep, many, unblock the waterway; digging wells and pools".

This same character pronounced as xùn is a place-name: Xùn. A place which is known for its deep waters.

氵夋
At left 'water', at right an old character with the meaning 'move slowly'.

The scientific approach is to choose between those two meanings. Either 'deep', or Xun, but not both at once.
Poets (and Chinese) have a different approach: both. Because the two meanings enhance each other.

If you want to make clear how deep and exhaustingly something is being done, wouldn't it make the picture more complete to compare it to the place Xun? Everyone knows that the waters there are so deep and dangerous!

In Rutt (Zhouyi, 1996): "...the place-name had oracular force because of its danger". It is the same force poets make use of. Oracles and poets both use imagery to convey their message. Both speak to your heart, not that much to your mind.
Posted by LiSe at 4:32 PM No comments: